Why the period is angry.

First, read this article. And then after you do it, tell us what you think about the author's observations. It’s an interesting comment on punctuation’s changing role in today’s text messaging, posting, tweeting world.

Notice - the period is angry.

For a quick summary, the author notes that the period, originally the sign for no expression whatsoever, has become a sign of anger. He writes, “people use the period not simply to conclude a sentence, but to announce ‘I am not happy about the sentence I just concluded.’”

signifies that the sender is satisfied with the plans. But,

means that the sender is not at all satisfied with the outcome. In fact, the second response oftentimes denotes anger when used while texting.

Why did the period become angry?

Interestingly enough, a long time ago, even after punctuation developed its own system and became more than a way to express rhythms of speech, only the exclamation mark and the question mark ever indicated tone. The period simply signified a break. Period.

Why does has this phenomenon happened? The author speculates that the line break has taken the place of the period. Check out the example below:

What's next for the period? 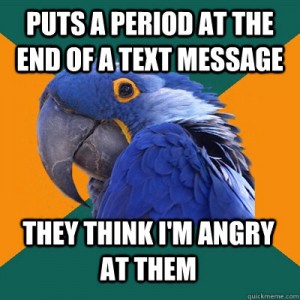 So, what happens next for our antiquated punctuation mark? Will it fall into disuse, just as its cousin, the interrobang (yes, it’s a real word), did?

Of course, it’s not like the period has dropped out of use altogether. I’m using it frequently in this article. When you write emails to your boss, you use the period. When you read a book, you don’t even notice all the periods, but they’re there.

Perhaps it’ll live on in formal writing for the time being. And then, who knows?

What’s your guess? Lay out your hypotheses in the comments below.

Older Post What’s your brand’s Tweet style?
Newer Post Pack a Punch in Your (Short) Writing
Back to Archive
We use cookies to improve your experience on our website. By closing this banner or interacting with our site, you acknowledge and agree to this.